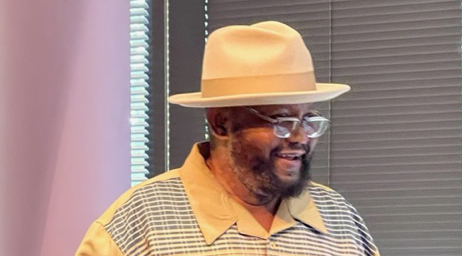 If I Were a Wise Man, I Would Do My Part…

You have heard of the wise prophets of old.  Hundreds of years before that starlit night in Bethlehem, prophets like Isaiah and Micah foretold of the Messiah that was to come to deliver His people – of the One that would be the King of Kings!  Only through the Holy Spirit could they have had such wisdom and knowledge of this marvelous One that was to come.  Likely it was their close walk with and relationship with God that gave them “ears to hear” what the Spirit was saying and “eyes to see” what the Almighty would someday do for humanity.

Do such individuals still live among us?  People that are WISE because they walk with, listen to and serve the Living God?  Well yes, I believe they DO!  In fact, I want to share an example of just such an individual with you.  This person is one of the longest serving GraceInside Virginia State Prison CHAPLAINS.  His name is Chaplain William Moore III.  Chaplain Moore has been with GraceInside (formerly Chaplain Service) for nearly 19 years – since July 1, 2004!  For almost two decades now he has faithfully served as the Chaplain at Sussex II State Prison.  He serves this large prison facility 30 hours per week.  And on top of that, he also serves 10 hours a week as the very first (and current) Eastern Region Supervising Chaplain!  He is the immediate supervisor of all of GraceInside’s Chaplains at all of the state prisons in the Eastern Region of the Virginia Department of Corrections.

Supervising Chaplain William Moore III has so many years of experience and expertise as a prison Chaplain that he is great at hiring, training and mentoring new Chaplains.  He has earned the admiration and respect of so many DOC Wardens and administrators that he is very skilled at “putting out brush fires”, problem-solving inmate religious complaints/grievances, mediating tricky issues that sometimes arise between Chaplains and Wardens (or Chaplains and religious volunteers from local churches and statewide and national prison ministries).  Chaplain Moore has “learned the ropes” and thus is an excellent guide for our newer prison Chaplains.  But he got that way through many years of life experiences – many of them PRIOR to his work in prison chaplaincy.

William Moore III was born in Newport News, VA, and he graduated from Hampton High School in Hampton, VA in 1969.  He would go on to work towards and obtain several higher educational degrees and honors, but first he would commit some years of his life to serving his country and to pursuing other interests and using some of his other talents.  William served in the United States Army from June 1970 through January 1972, when he was honorably discharged.  During these years, William received a Letter of Commendation from the City of Alexandria, LA.  He also received a Leadership of the Cycle Award from the U.S. Army.  Additionally, William received a Letter of Commendation from Major General John G. Wheelock III, as well as an Outstanding Serviceman Award from the U.S. Marine Corps.

William was also gifted by God with an amazing, deep, booming (and yet “honey smooth”) voice – one that would work perfectly over the airwaves.  From 1971 to 1993, that distinctive voice could be head on radio stations from Savannah, GA to Jacksonville, FL to Norfolk, VA to Richmond, VA.  In addition to spinning records as a deejay, William also served as a Music Director, an Assistant Program/Music Director, a Program/Music Director, an overall Program Director and even as an Operations Manager at one radio station.  One little known fact is that William actually got to sit down and interview many music greats (like Stevie Wonder, Aretha Franklin, Gladys Knight and the Pips, Ike and Tina Turner, etc.).  He sometimes served as a host and announcer at concerts and musical events.  However, the radio/music business on the local level doesn’t always fully cover the bills, so William did other things like working as a Restaurant Manager for Hardees in the early 1980’s.  From 1986 to 1995, William owned and operated his own yard and groundskeeping service.  Beginning in 1995 and continuing on for many years, William got into the real estate business.  With his smooth, soothing voice and his years of varied experiences, William did very well as a Realtor, even winning the Century 21 Million Dollar Producer Award in 1997.

But let’s return to his educational pursuits, and after that to his call to the ministry.  William Moore earned his B.A. in Religion & Philosophy (with a Minor in Journalism) from Virginia Union University in 1987.  (He made the National Dean’s List in 1984 and even won an Award of Excellence in German during his college years.).

Aside from his many other talents and interests, William had a growing walk with Christ and an ever deeper sense of calling to the ministry.  Thus, he was first Licensed to preach and then became a fully Ordained Minister of the Gospel in 1981.  Also in 1981 Rev. Moore began serving as Associate Minister at First Baptist Church East End in Newport News, VA.  Then from 1986 to 2003 Rev. Moore served as Pastor of Guildfield Baptist Church in Powhatan, VA.  During these years of pastoral ministry, William continued his education, earning a Master of Divinity (M.Div.) Degree from the Samuel DeWitt Proctor School of Theology at Virginia Union University (Richmond, VA) in May 2004.  Just a few months after that, Rev. Moore came on with GraceInside (then Chaplain Service) as Chaplain at Sussex II State Prison, and the rest (as they say) is history!

William Moore’s military service, business knowledge, education and experience in pastoral and chaplaincy ministry have made him a valuable resource for GraceInside’s ministry.  Now this “wise old Chaplain” can give sage advice to newly hired Chaplains, serve as a listening ear when Chaplains are struggling with their many ministry/job duties, and gently but firmly correct and provide guidance when one of his Eastern Region Chaplains appears to be headed in the wrong direction or sailing into stormy waters.  What a GIFT Chaplain William Moore III is to our ministry and to the Chaplains he supervises and guides!  How we thank God for this “Wise Man” that he has placed amongst us!

Chaplain William Moore III is a shining example of the wise, talented/gifted, called, dedicated, faithful Chaplains that God has brought to our unique prison ministry.  And Chaplain Moore is just one of GraceInside’s 33 CHAPLAINS, serving at ALL 42 VIRGINIA STATE PRISONS, ministering to the spiritual needs of nearly 24,000 INCARCERATED MEN AND WOMEN!

Chaplain Moore continues to minister and lead with the WISDOM that God has given him over the years – as both an honored Veteran and as an extraordinary Chaplain.  The verse of our Christmas theme song that is quoted above says, “If I were a Wise Man, I would do my part.”  Chaplain Moore is doing HIS part – giving his all in love and service to Christ and to “the least of these.”

Won’t YOUask God for the WISDOM to do YOUR very best this Christmas – and ask Him what “part” you can play in this vital, life-changing ministry?  Remember, the Baby born in the manger became the Lamb of God that gave His life for all.  Indeed… What shall we give HIM??? 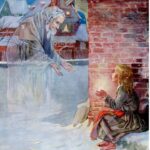 Yet What Can I Give Him? Give My Heart! Have you read the Christmas fairy tale, The Little Match Girl? As you reflect on this 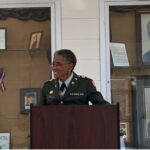 If I Were a Shepherd, I Would Give a Lamb Have you ever known a person that just keeps GIVING and GIVING?  You know, the 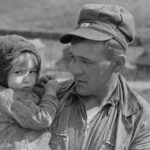